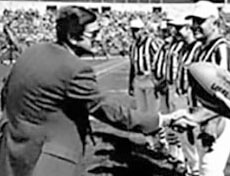 Tad serves as president of the Koret Foundation and chairman of Taube Philanthropies. At his alma mater, Stanford University, Taube is founder and advisory board chair of the Taube Center for Jewish Studies, established in 1986, and past chair of the Stanford Athletic Board. His involvement in Stanford Athletics includes his family’s principal gift to the Taube Family Tennis Stadium and his significant support of Stanford’s new football stadium, built in 2006. He was also a founder of the United States Football League (USFL) in 1982, and was principal owner of the Oakland Invaders football franchise. A child actor and avid tennis player, Tad has received many prestigious awards and honors. “The Forward” recognized him as one of the fifty most influential Jews in America.