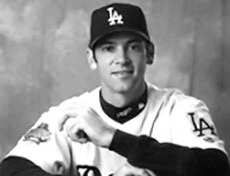 Shawn is the first recipient of the Jewish Sports Hall of Fame of Northern California’s Hank Greenberg Award. This year and for many years to come, the Hammerin’ Hank Greenberg Award will honor outstanding Jewish athletes whose careers, though not centered in Northern California, have by some particular dramatic career decision inspired and influenced generations. Shawn, our first honoree, was a first-round draft pick and a two-time major league All-Star. He drove in 100 runs four times and scored 100 runs four times. Shawn also hit 40 or more home runs three times, led the league in doubles, extra base hits, and total bases. Additionally, he won both a Gold Glove Award and a Silver Slugger Award, and set the Dodgers’ single season record in home runs. At the time of his retirement, he was one of only four active players with at least 300 home runs, 1,000 runs and RBI, 400 doubles, a .280 batting average, and 150 stolen bases. The others were Barry Bonds, Ken Griffey, Jr., and Gary Sheffield. He served as spokesman for KOREH, the Los Angeles Jewish Coalition for Literacy. In 2001, he appeared in more games than any other Dodger (161 of 162 games, and had the longest consecutive-game playing streak in the majors (408 games). That streak came to an end on September 26, when Shawn decided not to play on Yom Kippur. Shawn was inducted into the National Jewish Sports Hall of Fame in 2005.