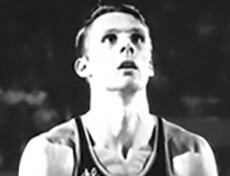 Rickwas named one of the 50 Greatest Players in history and is the only player to lead the NCAA, ABA and NBA in scoring for an individual season. In 1987, Rick was inducted into the Naismith Memorial Basketball Hall of Fame. An All-America at the University of Miami, NBA Rookie of the Year with the San Francisco Warriors, 1967 NBA All-Star Game MVP, Rick also earned All Star status in the ABA with the Oakland Oaks and New York Nets. He returned to the NBA, with the Warriors and led a four-game sweep of the Washington Bullets in the NBA Finals where he was named NBA Finals MVP. Rick has four sons: Scooter, Jon, Brent and Drew, all of whom were professional basketball players. His fifth son, Canyon, is currently playing college basketball for the Charleston Cougars. Today, Rick is very generous with his time, supporting a variety of nonprofit organizations.