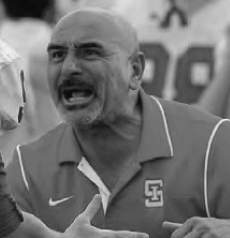 is not exactly a “native” San Franciscan, but he likes to say he has a birth certificate, 2 diplomas, and a marriage certificate that say otherwise.  Born in 1958 at St. Mary’s Hospital.  It was when the “front door” was on Hayes St.  He would find himself a patient there 5 times for different surgeries before he was 8 years old.

Raised in the Westlake district of Daly City.  A graduate of Our Lady of Mercy.  The two San Francisco diplomas are from St. Ignatius College Prep and San Francisco State University ( BA in Broadcast Communications).  Paul has always felt the Excelsior District was his “home away from home.”  His “nonni” lived on Theresa St. where he spent countless weekends as a kid.  Paul’s dad, Dino, owned and operated Central Drug Store at the corner of Mission and Santa Rosa.  The business dates back to 1910.  Dino started working there in the 40’s, and became owner (along with his brother Bill Tonelli) in the 1960’s.  Paul’s mom, Elsie, and brother, Jerry, continue to run the business today.  They are very proud to continue the 110-year old tradition of serving the Excelsior.  Paul got his start in Bay Area radio in 1987 as an airborne traffic reporter for K-101, KNBR and KSJO.  In 1989 he became the “Tonelli” half of the Lamont & Tonelli morning show.   “Lamont & Tonelli” have been at or near the top of the Bay Area radio ratings for 31 years.  Starting in 1989 in San Jose at 92.3 KSJO, then to San Francisco in 2003 at 107.7 “The Bone” (KSAN-FM).  Their show continues at “The Bone” today.  Paul is a huge sports fan and a life-long 49er (anybody remember the “Christopher Milk section” at Kezar?), Giants, and Warriors fan.  As a kid he sold programs at Kezar stadium during the 49ers final two seasons there.  In 2007 he had a dream come true when landed a job as the P.A. game announcer for the 49ers at Candlestick Park.  This coming season at Levi’s Stadium will be Paul’s 15th season calling “49ers…..FIRST DOWN!!”

In addition to his busy life style and business, Paul is very involved in youth sports at his Alma mater, St. Ignatius College Prep,  as well as acting as M.C. for fundraising events for the Boy’s & Girl’s Clubs of the Bay Area and has been involved in the Columbus Day celebration and parade in North Beach in San Francisco over many years. Additionally, Paul participates in the City Youth Now organization helping underprivileged youngsters in San Francisco.

Paul and his family’s long and distinguished history in the City made him an ideal current member of the San Francisco Historical Society’s Advisory Board along with other notable San Franciscans such as Dr. Renel Brooks-Moon, Willie L. Brown Jr.,Greg Suhr and Joanne Hayes-White.