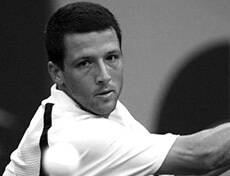 Paul, a native of Rockville, Maryland, had a stellar tennis career for the Cardinals in the 1990s, capping his college career with Pac-10 Player of the Year honors in 1998. He was the first player in NCAA history to compete as a starting member of four consecutive national championship teams and the first two-time recipient of college tennis’ Arthur Ashe Sportsmanship and Leadership Award. He went on to have a solid pro career, climbing to as high as number 58 in singles. In 2014, he was named head men’s tennis coach at Stanford – a position that has since been endowed by philanthropist Tad Taube (Stanford, 1957) and his wife, Dianne. Paul is Stanford’s first Taube Family Director of Men’s Tennis, and his team plays its home matches in the 3,000 seat Taube Family Tennis Stadium, which was built 18 years ago.