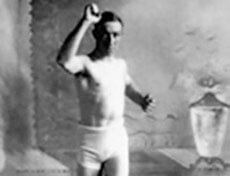 MonteAttell, Abe’s brother, was nicknamed “The Nob Hill Terror” for his penchant for youthful fisticuffs in that San Francisco neighborhood. Monte began his professional career in 1905 and lost only two fights over the next five years. In 1909, at Coffroth’s Arena in Colma, he faced former champ Frankie Neil for the vacant crown and knocked his opponent out in the 18th-round to win the title. Monte’s brief reign ended in February 1910 when Frankie Conley knocked him out in the 42nd round to take the championship.