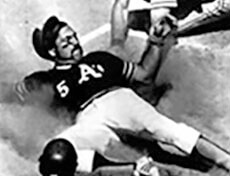 Mike “Super Jew” Epstein played first base for the Baltimore Orioles, Washington Senators, Oakland Athletics, Texas Rangers, and California Angels from 1966 to 1974. He was a 1964 collegiate All-American at the University of California, Berkeley, where he still holds the career batting record of .384. He was a member of the first U.S. Olympic baseball team and was instrumental in its gold medal victory. His peak season was in 1969 with the Senators, the only year in which they finished above .500. He hit 30 home runs in only 403 at bats, had 85 RBIs, and hit for a .278 batting average with an excellent .414 on base percentage and .551 slugging percentage. In 1972, Epstein played in the Word Series for the Oakland A’s. During the playoffs, he and his teammates Ken Holtzman and Reggie Jackson wore black armbands in memory of the 11 Israeli athletes murdered by terrorists at the Munich Olympics. Epstein’s former Senators manager, Hall of Famer Ted Williams, claimed that “Mike comprehends and teaches the science of proper hitting as skillfully as anyone I have run across in all my years of baseball.”