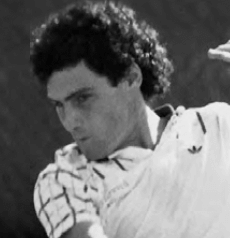 is an American sports administrator and former professional tennis player who was the commissioner of the collegiate Pac-12 Conference until 2021. He has also served as chairman and CEO of the Women’s Tennis Association and as president and COO of ATP Properties, a division of the Association of Tennis Professionals.

New York, NY, June 11, 2013 … The Anti-Defamation League (ADL) has presented Larry Scott, Commissioner of the Pac-12 Conference, with the ADL Americanism Award in honor of his lifetime commitment to promoting fair play in sports. As Chairman and CEO of the Women’s Tennis Association, Mr. Scott waged a long and successful campaign for women’s equality, culminating in Wimbledon’s decision in 2007 to become the final Grand Slam tournament to award equal prize money to women.

Two years later, Mr. Scott took a firm stand when the Israeli tennis player Shahar Pe’er was denied entry by the United Arab Emirates, preventing her from competing in the Dubai Tennis Championships. The Dubai tournament was fined a record $300,000, Mr. Scott and the WTA refused to back down, and Ms. Pe’er and her fellow Israeli players were guaranteed the right to compete the following year.

“Larry Scott has devoted his life to the principle that academic excellence, athletic achievement and human rights can be simultaneously pursued,” said Abraham H. Foxman, ADL National Director. “He has put his reputation on the line to further fairness and good sportsmanship and decency, the values on which sports is based.”

Throughout his career as a student-athlete, professional athlete and sports executive, Larry Scott has been a game changer: a bold, innovative leader with a vision for transformative change — from expansion and revitalization of the Pac-12 to equal prize money at Wimbledon. Commissioner Scott’s firm belief that sport has the power to be a force for positive change has been the hallmark of his career.

Scott has often earned recognition for his visionary leadership. He has been a finalist for the Sports Executive of the Year Award given by Sports Business Journal and was awarded the Vision Award by Cynopsis Sports. Scott was also given the Americanism Award by the Anti-Defamation League in tribute to his mission of fostering positive change through sports. He currently serves on the ADL Board as the Vice Chair.