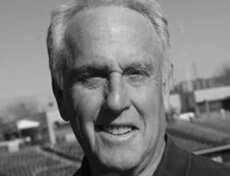 has covered sports as a broadcaster for 37 years and has been a recipient of numerous awards. He has gone from covering college basketball and football to calling baseball games for the California and Pacific Coast Leagues, the Chicago White Sox and the Oakland A’s. Now in his 22nd season with the A’s and 12th year as the team’s lead radio announcer, Korach’s tenure is second only to the legendary Bill King. He shares what he’s learned about his ex-booth mate in “Holy Toledo – Lessons from Bill King: Renaissance Man of the Mic.” In his concern for Oakland’s high school baseball programs, he founded Ken Korach’s A’s Winning for the Community to raise funds, and serves as an advisory board member for the Oakland Tech High School Field of Dreams. Korach and his family divide their time between Oakland and Henderson, Nevada.