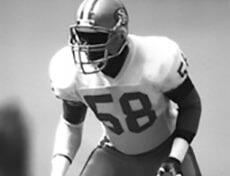 Keena, an 11-year NFL veteran who played his entire career for the 49ers (1980-90), was originally chosen by the Miami Dolphins in the second round of the 1980 NFL Draft out of Purdue and traded on draft day to the 49ers. One of the all-time great linebackers, the former Pro Bowl selection earned four Super Bowl Championship rings with the team. In 1992, Turner joined former coach and mentor, Bill Walsh, at Stanford University, where he served as the linebacker coach for the Cardinals for three seasons. Upon leaving Stanford, Turner embarked on his radio and television career, while also working in community relations for DeBartolo Entertainment. He went on to be a color analyst for 49ers preseason games for 13 years (1995-2007) and was a co-host for the 49ers Preview Show. He also was the radio/TV color analyst for the San Jose SaberCats of the Arena Football League for 14 seasons. In 1998, Keena returned to the 49ers as Vice President of Football Affairs, overseeing the Player Engagement Program.