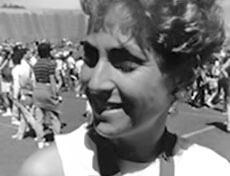 Judy competed during an era in which there were not many opportunities to swim competitively, and as a result, her accomplishments came after her school days. In Gay Games 2, she won a bronze medal in the Women’s 200-yard breaststroke. In Gay Games 3 she won the gold in the Women’s 200-meter breaststroke, and the silver in the Women’s 100-meter butterfly and Women’s 200-meter free relay. The Gay Games is the world’s largest sporting and cultural event organized by and specifically for LGBT athletes, artists, and musicians. Originally called the Gay Olympics, the Gay Games began in San Francisco in 1982 to promote the spirit of inclusion and participation, as well as the pursuit of personal growth in a sporting event.