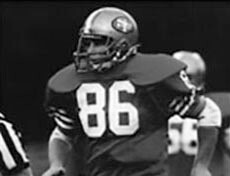 John set a school record for receptions by a tight end (121) and was All-Big Ten as a junior and senior. He ranks 4th on the all-time Ohio State receiving list and was voted the team MVP as a senior. Frank was also a two-time Academic All-American and was a Rhodes Scholar nominee as a senior. His five-year pro career was spent with the San Francisco 49ers, which he helped lead to victory in Super Bowl XIX and Super Bowl XXIII. After retiring from football, Frank earned his M.D. from Ohio State in 1992. He is a board-certified Otolaryngologist and dedicated facial plastic surgeon and hair loss expert in New York. In 2002, he co-founded the Israeli Bobsled Team. In 1998 Frank was inducted into the Ohio State Athletic Hall of Fame, and he was inducted into the National Jewish Sports Hall of Fame in 2006.