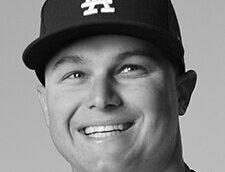 plays outfield and first base for the Los Angeles Dodgers, following in the footsteps of his father, Stu, a 1985 Dodger. At Palo Alto High School, Pederson set records in both football, with 30 receptions for 650 yards and 9 touchdowns, and baseball, batting .466 with a .577 on-base percentage and a .852 slugging percentage, with 20 stolen bases in 22 attempts.

Pederson was named Minor League Player of the Year, and an All-Star in the Pioneer, Rookie, and Southern Leagues. After the 2013 season, when he was the youngest player on the Israel national team in the World Baseball Classic, Baseball America ranked Pederson the Dodgers’ #1 prospect. In 2014, he was named the Pacific Coast League’s MVP for 30 homers and 30 stolen bases, the first in 79 years. Additionally, he was designated Baseball America’s AAA Player of the Year and made its All-Rookie team, and played the 2015 Major League Baseball All-Star Game.