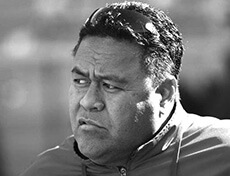 Jesse was the recipient of the 2015 Mensch Award, an annual honor given to a non-Jewish individual who best exemplifies the high ideals we have come to expect from the leaders of our own Jewish community. He spent his entire career (1983–1997) with the San Francisco 49ers. A 6’4”, 278-pound fan favorite who played both center and offensive guard, Jesse is one of six 49ers to win four Super Bowl rings. Since retiring, he has remained active in the community as well as with the 49ers alumni group. The Hawaii native has also played an integral role in establishing the Polynesian Pro Football Hall of Fame in Oahu, which inducted him in 2015 as a member of the second class.