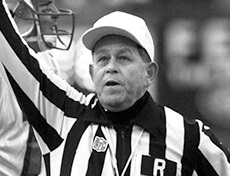 Jerry is 2015’s winner of the Hank Greenberg Award. Born in Chicago in 1935, Jerry was an NFL official for 23 seasons, becoming one of the most recognizable referees in the league through his 1999 retirement. He is the only NFL head referee to officiate in four Super Bowls. When he was a college official, he served as the back judge in the 1966 “Game of the Century,” when number one ranked Notre Dame (8–0) and number two ranked Michigan State (9–0) played to a controversial 10–10 tie. Jerry was inducted into the National Jewish Sports Hall of Fame in 2007.