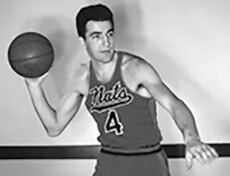 Dolph, a former coach in the NBA, and a 12-time All-Star, played his entire Hall of Fame career with the Nationals and their successor, the Philadelphia 76ers (1948-1964). In his 16-year career, he led the team into the post-season 15 times. He played college basketball at New York University from 1944-48, where he was an All-American and won the Haggerty Award in his final year. In 1970, he was elected to the NBA 25th Anniversary Team as one of the top 12 retired players. In 1972, Dolph was elected to the Naismith Memorial Basketball Hall of Fame. He is also a member of the International Jewish Sports Hall of Fame, the U.S. National Jewish Sports Hall of Fame, and the National Jewish American Sports Hall of Fame. In 1996, Dolph was selected as one of the 50 greatest NBA players of all time.