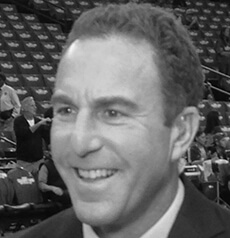 After working as an assistant basketball coach at Stanford University, in 1987 Feldman began his broadcasting career in radio at San Francisco’s KCBS 740. The following year he segued to television as an anchor/reporter, spending a year at KTIV in Sioux City, Iowa, then another year at Monterey’s KMST-TV, and finally landing at the Orange County News Channel from 1991-96. Next, Feldman joined ESPN for four years as the primary host of College Hoops 2Night on ESPN 2, in addition to his SportsCenter and ESPNews reporting and college basketball play-by-play announcing. Feldman’s subsequent role took him to Washington D.C. for a dozen years, as a sports director and anchor/reporter for WTTG-TV, as well as a college basketball games announcer for the Mid-Atlantic Sports Network. The Palo Alto native returned home in 2012 to host all 49ers programming for NBC Sports Bay Area, where he also co-hosted the daily SportsNet Central with Ahmed Fareed.

Feldman has won eight Emmy Awards, including three for Best Sports Anchor, and was honored as the 2011 Washington D.C. Sportscaster of the Year by the National Sportscasters and Sportswriters Association.