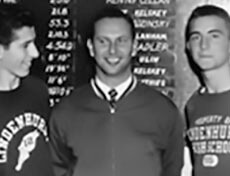 Carl was our most senior honoree to date, 88 years young, when we inducted him in 2011. His life in sports reads like a “how to” in making significant contributions to the community as a teacher and leader. From Stanford and Navy baseball in the 1940’s to migrating to the east coast, where he coached high school teams in football, basketball, track and field, and cross country to local and state championships, Carl made a difference in many athletes’ lives. He served as head coach at State University at Farmingdale before returning to the west coast to begin a career at Northern California’s Foothill, De Anza, Diablo Valley and Granada Colleges, where his coaching of more than 3,000 students earned him the title of Bay Area’s best golf instructor. Carl received the Johnny Walker International Hole in One Award on the 175-yard 18th hole. He is the author of numerous articles on fitness and golf.