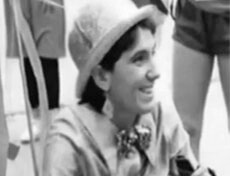 Bonnie’s dream of becoming a dancer ended when an all-terrain vehicle accident left her a quadriplegic at the age of 15. She started swimming, and throwing the discus and shot put, then went on to set speed records in her wheelchair. She held national and California records in the 100, 200, and 400 meters. Bonnie founded the California League of Quad Rugby (Murder Ball) and her team, Quadzillas, has participated in the National Wheelchair Games. Just three years after its founding, the Quadzillas won the 1990 Wheelchair Rugby Championship. To play quad rugby, one must be medically classified as a quadriplegic, with some impairment to all four limbs. The game is similar in strategy to basketball, and the goal is to have possession of the volleyball before reaching the goal line with at least two wheels. There are four players on the court at any one time, and physical contact is permitted in this fast-paced and competitive sport. Bonnie’s other pioneering credits include wheelchair tennis matches, and she has led outdoor adventures such as skiing and rafting. She formed the AXIS Dance Company, which choreographs modern dance pieces that use the strength and movement of the wheelchairs to facilitate a new form of dance. Bonnie founded and directs Access Northern California, a nonprofit organization serving travelers with physical disabilities. She also writes for travel publications and is an avid gardener.