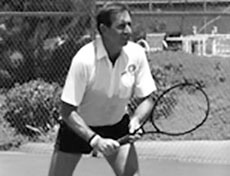 Bob’s tennis career has spanned seven decades. During his years at Lowell High School, he played in the Junior Davis Cup. Bob was the youngest Lowell student ever to receive an athletic Block L award. Bob went on to play tennis at UC Berkeley, followed by the U.S. Navy Pacific Fleet. He was the Pacific Innerservices Doubles Championship Finalist in 1953, and the Pearl Harbor U.S. Navy Singles Champion in 1952 and 1953. Bob has competed internationally in Australia, Austria, England, France, Germany, Ireland, Israel, Italy, the Netherlands, Poland, and Russia, where he won the White Nights title. Besides winning numerous championships in the United States, Bob has won four gold medals and one bronze in World Maccabiah and Pan Am Maccabi Games. His game is best described by his touring doubles partners: Sam Sporn and Jay Sondheim. Sporn said “I readily attest to his physical and mental courage, his competitiveness and great athleticism — a role model in all respects.” According to Sondheim, “Bob never knew an overhead he didn’t smash… he has a slice like a mohel.” Former president of Rochester Big & Tall, Bob is presently a principle partner of the San Francisco Giants, board chairman of the Institute on Aging, board member of CMRG (NASDAQ), and board member of Youth Tennis Advantage.