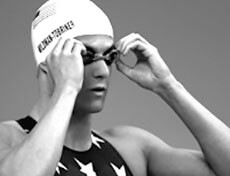 Ben was an Academic All-American at Stanford. He received a degree in biomechanical engineering and attended medical school at the University of California San Francisco and Duke University, where he is currently a radiology resident. While attending Lick-Wilmerding High School, Ben trained at the Boys & Girls Clubs of San Francisco, where he continues to volunteer. He was Pac-10 Swimmer of the Year and ESPN Magazine Division Player of the Year in 2007. He also won the Stanford Al Masters Award, its highest athletic honor, and was three-time World Champion, two-time U.S. Champion, and 20-time All-American with his victory in the 50-meter freestyle at the 2007 World Championships, gaining recognition as a threat in swimming’s most exciting race. Most world-class athletes live their whole lives training for the Olympic Games — Ben had only100 days. Just six months from Olympic Team Trials, he tore his pectoral muscle lifting weights. The diagnosis for recovery is generally 9 to 12 months, but for Ben, that was not an option. Able to stroke with one arm with three and half months until Trials, he got back in the pool. At the 2008 Olympics in Beijing, during the evening preliminary heats, he became a member of the world-record 4 x 100m freestyle relay (3:12.23) by swimming the third leg in a time of 48.03. The next day, Ben earned a gold medal (but lost the world record) when Jason Lezak swam down Alain Bernard in the final leg of the relay’s final in world-record time.