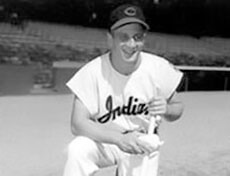 Al was a third baseman with the American League Cleveland Indians from 1947-56. He was baseball’s first-ever unanimous selection as Most Valuable Player in 1953. For five consecutive seasons (1950-54), Rosen knocked in 100 or more runs each year. Twice, Al led the American League in both home runs and RBI. Four consecutive times he was elected an All-Star (1952-55), hitting two homers and five RBI in the 1954 game. He re-entered baseball 20 years later as president of the Yankees, then the Astros, and finally as president and general manager of the Giants. Al’s brilliant maneuvering brought San Francisco from last place in 1985 to the NL West title in 1987.