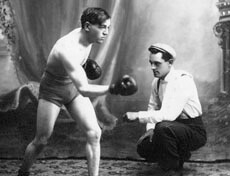 Al “The Little Hebrew” Emmick-Cohn (not to be confused with Abe “The Little Hebrew” Attell), began his boxing career at an early age in San Francisco. Emmick-Cohn fought fellow San Franciscan Monte “The Nob Hill Terror” Attell in a highly publicized title bout that drew a record crowd to witness lightweight boxing in The City by the Bay. After winning two lightweight championships, Al retired from the ring and became a distinguished member of the San Francisco business community. He was a beloved role model for the large Cohn family. We celebrate his many contributions to the world of sports, as well as to the Jewish community, and congratulate his daughter Betty Hersch May and his other descendants on his induction into the Jewish Sports Hall of Fame of Northern California, class of 2009.