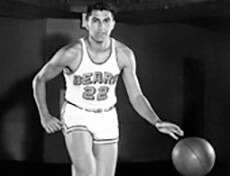 Al served as team captain of Cal’s 1959 national championship team, and a driving force behind the Bears’ 25-4 season, which included a 64-58 win over Cincinnati and Oscar Robertson in the NCAA semifinals and a 71-70 victory over West Virginia and Jerry West in the NCAA finals. Al was a first-team All-Pacific Coast Conference choice. He averaged 9.2 points per game as a senior, and scored 18 points against Cincinnati in the semifinal game. He was voted as one of five members of the National Association of Basketball Coaches’ Silver Anniversary All-America Team, an honor based on basketball and lifetime achievements. Al built a highly successful tire business, EMPCO Industries, based in Glendale, California.