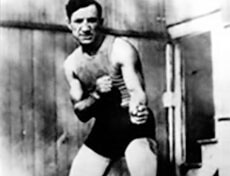 Abe“The Little Hebrew” Attell held the World Featherweight Championship in 1903 and 1904, and from 1906 to 1912. Abe successfully defended his championship 21 times during the nine years he held the title, winning 23 of his first 29 fights by a knockout. Abe was elected to the Boxing Hall of Fame in 1955 and to the International Boxing Hall of Fame in 1990. Contrary to prevailing rumors, Abe was never convicted of any crime connected to the Chicago White Sox 1919 World Series scandal. Though indicted by the Illinois grand jury, Abe was able to convince them he was not the Attell they were looking for, and the charges against him were dropped.